I was released from treatment a year ago last week and I have to say, the last 12 months have been the most cherished of my life. Our family has had the opportunity to enjoy several unforgettable trips to some super-fun places, and we have equally relished the quiet, uneventful nights right here at home.

Creed turned 10 and finished a fabulous 4th grade year. Maddie turned 16, got her license, and we haven’t seen her since. 🙂 Just kidding. Sort of.

We have immensely enjoyed the “normal” that has been gifted to us and we are grateful for every moment and memory we’ve experienced this past year.

Diagnosis and treatment of breast cancer changed me in many ways. Most of them good. I have mentioned in previous posts that this experience has opened doors for me to minister to so many dear people that are going through a tough season.

Many times one’s purpose is born in their storm. That has certainly been true in my life as my battle has heightened my awareness of the needs of others and softened my heart toward those who are struggling. After each encounter in which I have the opportunity to pray peace and healing to a hurting heart, I’m thankful all over again that God has allowed me to be used in this capacity.

A while ago I was chatting with a friend and the conversation turned into one of those moments that I knew God divinely arranged. After we prayed and parted ways, something she said kept churning in me and I could not shake her words. She said, “Tina, I can handle anything else, but I cannot handle this. The situation I am facing is the one thing I cannot walk through. I just can’t do it.”

Her words hit a very tender spot in my soul. I felt the same way. My experience has certainly made me stronger. I’m a pretty tough cookie and there are many things I now know I can handle, but I knew, just like my friend, I have that one thing that I was quite sure I would not be able to deal with if I had to face it.

After our conversation my thoughts turned to many stories in the Bible that had that recurrent theme. God called Moses to lead the Israelites into the promised land and commanded him to be an advocate for his people by asking the king to set them free.

What did Moses reply?

He was willing to serve God in other ways, but what God needed of him was the one thing he didn’t think he could do.

And Jonah. We all know that story. God asked him to go to Nineveh and preach because the people there were wicked and needed to repent.

“But Jonah got up and went in the opposite direction to get away from the Lord.” (Jonah 1:3)

He would go anywhere else, but Nineveh was the one place he didn’t want to go.

We all have that one thing.

Just a few short weeks after that conversation with my friend, my one thing, became my reality.

After a glorious year of enjoying my family and living without cancer, I recently learned that it has returned.

So many other things I can handle, so many other situations I would rather walk through, but the recurrence of Triple Negative Inflammatory Breast Cancer was definitely my one thing I could not imagine facing again.

Yet here I am.

The last few weeks have been all too familiar; doctor appointments, biopsies, scans, telling our families, telling our kids, facing the myriad of decisions that come with all of this like treatments and doctors and faith and trust and whys and hows.

There’s a lot that I don’t know, but there are a few things that I do know.

I know I have the same cancer, and I know I trust the same God.

One of the most frustrating things in life is fighting the same battle over and over and over again. Just when you think you’ve kicked it, and you’re free to enjoy peace once again, it unexpectedly rears its ugly head.

It doesn’t matter what it is, facing a recurring battle of any kind can knock the wind right out of you. In my case it’s a cancer recurrence I hoped I’d never deal with again. For you it might be a destructive habit you thought you had defeated, a financial problem you were sure you had taken care of, a relationship; marital or with a child or other family member, that you thought had been worked out, but after a short time of peace, the turmoil started up again.

We are all familiar with David killing the Philistine giant, Goliath. It’s a fantastic story about an underdog, guaranteed to lose an impossible battle with an enemy bigger and stronger than him, but he had massive favor with God, and victoriously took down the giant.

We all love that story of young David, fresh from the fields where he had been tending his sheep, coming in with nothing but faith in the God whom he knew was bigger than any giant. With God’s help, he led the Israelite army to victory over the Philistines that day.

But did you know David faced a second giant many years later? He had made more than a few mistakes over the years, but now he felt like he was in a good place and he enjoyed his position as king once again. He had endured some tough years and participated in a few hard-fought battles since his encounter with Goliath, and it took a heavy toll on him. He was weary.

“Once again there was a battle between the Philistines and Israel. David went down with his men to fight against the Philistines, and he became exhausted.” (II Samuel 21:15)

The king, the famed giant-killer, was tired. He had been through so much, and there was nothing more he wanted to do than just enjoy the victory he fought so hard for and rest a while. And wouldn’t you know it? Right about the time he felt he could breathe, a familiar enemy came back to destroy him.

Staring him down, ready to defeat him, was a second giant.

I’m guessing if I could have had a conversation with David during that time he might have said, “I am a king, a warrior, a fighter. I’m brave and courageous. I’ve been through a lot and I can handle a lot, but the one thing I never want to face again is another giant. I’m too tired. I’ll fight these battles, and I’ll do my best, but know this, the one thing I can’t do is handle another giant.”

Facing the same battle again can make you weary. The hebrew word for exhausted in II Samuel 21:15 is uwph. It means “to cover, to fly, faint, flee away.” The kind of exhaustion facing the same tough battle, a second time, makes you want to give up and hide; run away and bury yourself in a hole, because it’s just too overwhelming to even think about.

You know what God did for David? He sent someone to help him slay that second giant. “But Abishai son of Zeruiah came to David’s rescue; he struck the Philistine down and killed him.” (II Samuel 21:17)

All of us have (or will) face a giant, and when we’ve defeated that area of struggle, we’re tempted to think that insures that we won’t have to fight that battle again. We just want to sit back and catch our breath, you know? We’ve been through a lot, we’ve fought hard. We were the underdog and the odds were not in our favor, but with God’s help we slayed that giant!

Then one day we look up and there it is. A stinkin’ second giant. We’ve taken it down before, but this time we’re not as confident. We’re tired, and still a little beat up from the first time; then God reminds us that we are not fighting this second giant alone.

Out of nowhere, this giant-killer, Abishai, shows up and slays the giant that came after David.

I may be facing this giant again, but this I know, I am not facing it alone.

Team Tina is FULL of giant-killers. There are hundreds of you out there that are reading this and I know you people. You know how to slay giants on your knees!

Patrick and I will be flying to Boston tomorrow. Tuesday afternoon I have an appointment with Dr. Beth Overmoyer, the founder and director at the Inflammatory Breast Cancer Program at the Dana-Farber Cancer Institute.

But you know what, I don’t have to do it alone.

That “peace that passeth all understanding”, I’ve got it. I’m tired. A little ticked off, too. But I’m not scared.

I’m so encouraged, and so full of faith. This inflammatory breast cancer giant is going down! God has already sent a few giant-killers our way, and I’m so incredibly thankful.

Today at church, my Pastor, Rod Loy, shared a powerful message. Regardless of the circumstances, we’ve already read the end of the book, and guess what? 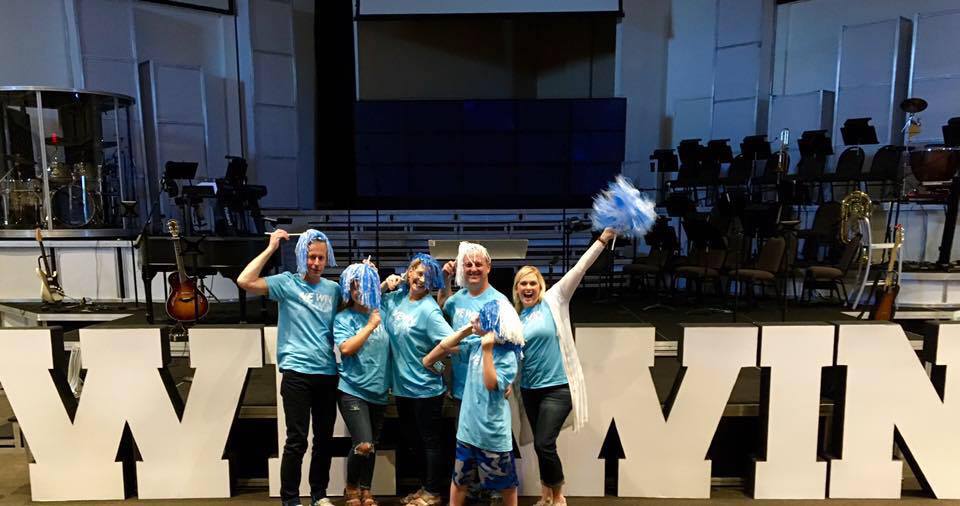 Don’t you love the pic we took with Pastor Rod and Cindy today? 🙂 We’re celebrating because we already know #WEwin!

Please get on your knees for me this week, Team Tina, and let’s go slay some giants!

*Shout out to Brandy Strain (Strain Photography) for the updated pics and to my über-gifted husband, Patrick, for the fab redesign on the blog.