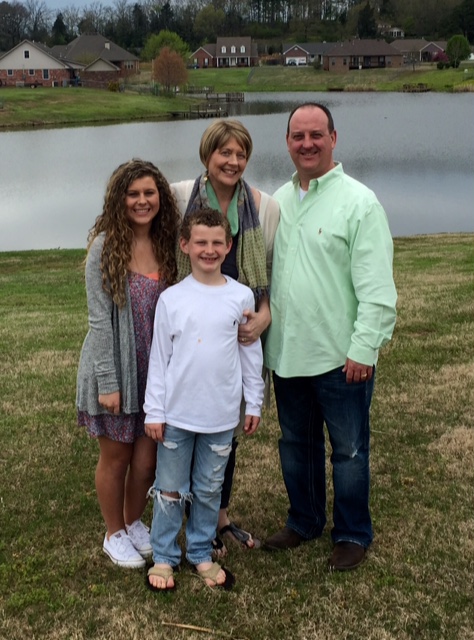 My dear friends, thank you, thank you for the prayers you all have prayed on my behalf over the last few weeks and months. My last chemo was March 31st and only six days later I was in church on Easter Sunday! That was such a miracle as I was barely out of bed on the 6th day after my previous treatments. I probably pushed it a bit more than I should have, but I knew it was doable and I did it! I loved being in church with my family and it was a very special Easter that we will never forget. 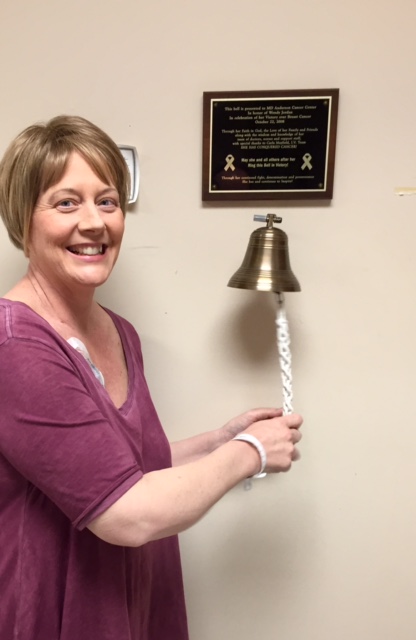 (I’ve included a picture of me ringing the bell at MD Anderson, which is customary after the last chemo treatment, and also a pic of my very cutie family that we took on our most favorite of Easter Sundays.)

I have continued to fare much better than I have after previous treatments, even though this was supposed to be the hardest one. It was a welcome reprieve after all I have dealt with and I know it was because so many people asked God for the strength to get me through it. I think you all were so persistent He finally just said, “Okay, okay, I’ll take care of it.” And He did! 🙂

Speaking of prayers and miracles . . .

My radiation oncologist ordered a PET scan this week because he needed an updated scan before my surgery. It is standard of care, he didn’t order it because he was expecting any issues, but quite honestly, I was shaken by the thought of undergoing such a detailed scan.

For those that don’t know, a PET scan is a full body scan that shows all bone and tissue (from thigh to the top of head). A radioactive dye is given intravenously and attaches to any cancer cells that are present in the body. If there is any cancerous cells in the body, the dye attaches itself to the cells and they light up on the scan. My last PET scan was taken right after my diagnosis in August. The tissue in my left breast, the skin on my left breast, and several lymph nodes lit up like the 4th of July on the previous scan, and while I was thankful it had not spread to another location (which made me stage 3c rather than stage 4), I wasn’t looking forward to having another one.

After finishing up my last treatment in March, I think I had chemo PTSD. (I just made that up, I don’t think it really exists, but it should, because I’m pretty sure I had it.) Sometimes the fear and memories of the fight don’t just go away because part of the battle is behind you. Even though I felt like I handled everything okay during the trauma of chemo, when it was finally over, all the pent-up emotions kinda flooded over me and for one of the first times in my life, I dealt with anxiety. Lots of it. And it made this scan very scary for me.

I’ve mentioned this before, but this type of cancer can spread to other organs even during treatment. Triple Negative Inflammatory Breast Cancer is vile. It’s just a horrible, horrible disease. The cancer cells are so aggressive, that sometimes they are tumor resistant and grow during treatment rather than shrink or disappear. I’ve never mentioned specific statistics or prognosis on this blog regarding IBC because I don’t want to speak it, publish it, or dwell on it, but it’s not good. (And don’t Google it.)

Last month, after my mammogram and ultrasound, my oncologist mentioned, for the first time, that I might actually have a “complete response” with the chemo. This means that the chemo alone rids the body of all cancer. She cautioned that she had never seen this happen with IBC, but the way I was responding made her think I just might be her first one. (She also told me that even if I did, it changed nothing as far as my future treatment plan was concerned.) I was encouraged she even mentioned it, because when it comes to my chemo response and ultimate outcome, she’s always been very vague.

So, I had the PET scan on Tuesday afternoon and late Wednesday my radiation oncologist called to give me the results.

Nothing. Lit. Up. NO-THING!

And while I should not have been surprised at all, because oh-my-goodness how we have prayed for this, I gotta tell you, I was in a little bit of shock.

I am a living, breathing, walking, talking miracle y’all. This just isn’t normal.

My doctor did caution me that sometimes there can be a few rogue cells here or there that can still be present, but there are so few of them that scans do not pick them up. However, if my pathology after surgery, matches what the scan showed,

On April 27th my surgeon will perform the mastectomy and also remove 14 lymph nodes on my left side. All of the removed tissue and each node will be tested to see if there are any cancer cells present. (I won’t know the results of the pathology report until 10 days after surgery at my post-op visit.)

(Regardless, I will still undergo four weeks of radiation after surgery, just in case a sneaky cell snuck by the scan, surgeon, or pathologist.)

So please join with me and thank God for the things HE has done, and continue to pray for pathology to give me a ZERO as well, and after radiation we’ll call this thing done! 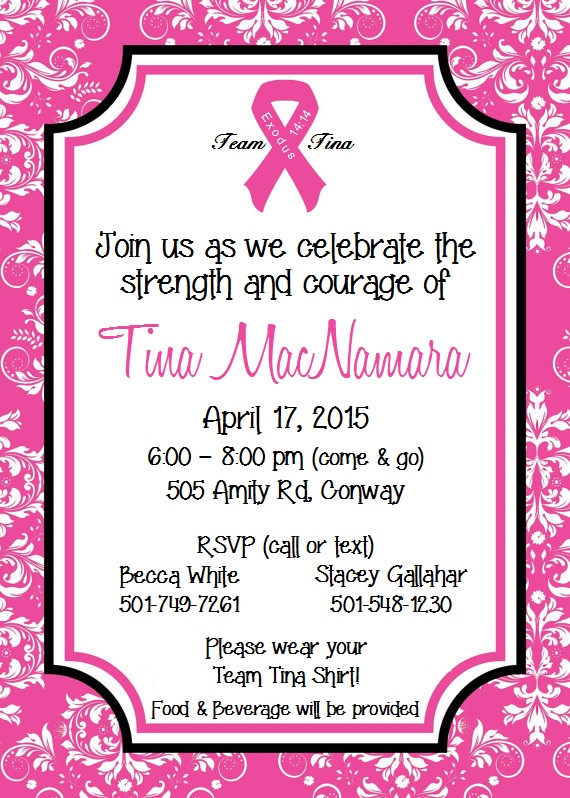 I have some very dear friends that think I have strength and courage. (Which is so sweet, really.) I will tell you who really has strength and courage; my family. They have fought this battle with me every day. But my friends think I am the brave one, so I will let them think that. 🙂 They have planned (without me knowing but I found out) a little party for me before my surgery. And you know I love a party. I’ve included the very jazzy invitation they made, so if you are in Conway tonight, come see me. I am very entertaining and you will be glad you did. 🙂 Actually, since I have been quarantined for the better part of eight months, I would love to see you, so if you’re available, please drop by so I can hug your neck and thank you in person for all of your prayers.

And, one more thing, (because for some reason, when I’m writing these updates I always think of a story in the Bible that might be of encouragement to some of you.) (And because I just talk a lot) I wanted to share this.

In 1 Kings the Bible tells the story of the Israelites battling the Arameans.

“The man of God came up and told the king of Israel, ‘This is what the Lord says: ‘Because the Arameans think the Lord is a god of the hills and not a god of the valleys, I will deliver the vast army into your hands, and you will know that I am the Lord” (1 Kings 20:28 NIV)

The enemy thought the God of the Israelites could only help them if they were in an ideal location that showcased their strengths, which apparently was on the hills. Their tactic was to instead, fight them in the valley, where they thought they could easily be defeated.

My God is the God of the mountain tops AND the valleys.

The Israelites fought the Arameans in the valley, a place where they were at their most vulnerable and where it seemed they could easily be defeated, but God arranged it exactly that way so that “you will know that I am the Lord.”

When the Israelites defeated this vast army in what was their most defenseless and susceptible location, it allowed them to see that it wasn’t their skill or smarts that gave them victory, only God could have done it.

When I was first diagnosed last August I was explaining to someone about the direness of the diagnosis and the battle we faced. I said, “I don’t know why I had to get the worst of the worst.”

She replied, “I think I know why. God is going to heal you, and when He does, because your diagnosis is so grim and seems impossible to beat, HE will receive all the glory. People will know it was only God that delivered you from this, not the wisdom of doctors, not cutting-edge medical care, not anything you have done, only God.”

I thought of that conversation within minutes of hearing ZERO. God can show up when you’re at your best, or your weakest, and He will come through for you right where you are. If your situation seems impossible, He may just be setting you up for an even greater victory. And when He does, you will know without a doubt, it wasn’t you, it was only God.

When it seemed completely impossible and unlikely

“And you will know that I am the Lord your God.”

Love you all, thank you for your prayers and please continue to pray. We’re almost there!