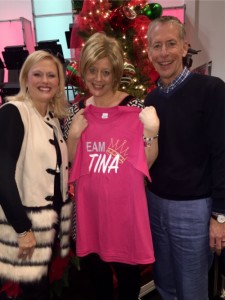 I wrote those words in a letter to my family and friends when I was diagnosed with Inflammatory Breast Cancer in August of 2014.

I didn’t fully understand at the time what that would actually entail, I just knew that the next year of my life would be a long and painful journey and I didn’t want to waste the pain. Before I could even process all the ways that diagnosis would affect my family and me, I was sure of one thing, my pain would have purpose.

I’m mostly a private person, and prior to my diagnosis, battling through breast cancer was not something I would have ever considered doing publicly. However, as the details of exactly what I was facing became evident, and I realized I was about to began an arduous journey of literally fighting for my life, I knew I was going to need the prayers and support of others. If these amazing people, who later became Team Tina, were going to take their time to pray for me and my family, then I felt the least I could do was allow them to come alongside me and we could all fight this thing together.

As I began to write about what I was going through, I found I constantly had to balance the details. Do I mention this? Is that oversharing? Do people really want to know this? Do I really want them to know this?

I had never been so public about something so personal, and honestly, there were a few posts that made me uncomfortable. I like to make others happy. I wanted my people to read positive words and feel all warm and fuzzy when they looked at my blog. But as anyone who has ever gone through a crummy season in life can attest, it’s not always sunshine and rainbows. And it’s not easy to share that other side of the experience.

I wanted you to think I could handle it. No problems here. God and me, we’ve got this covered. Chemo, surgery, radiation? Easy peasy. Leaving my kids every single week to travel to Houston and then coming back so sick I could hardly leave my bed? Minor inconvenience. Missing out on ballgames, performances, class parties? There’s always next year. Losing my hair? Nah, it’s just hair, it will grow back.

And even deeper and more personal: fear that I won’t be able to finish raising my kids. That I won’t be here to see them graduate. That this disease has forever scarred them. That if my outcome is not good they will question God and lose faith. That Patrick shouldn’t have to deal with such a broken wife. That my family shouldn’t have to worry and be so inconvenienced.

Friends, that’s hard to stuff to write. And even harder to click “post” and let the whole world in on those deep personal battles.

Patrick set up a WordPress app on my phone that tracked how many people visited my site and which posts they were reading. (It doesn’t tell me who, just how many.)

Every once in awhile I would check the app and I was shocked to realize, the posts I fretted about the most, the ones where I just laid it all out there and expressed my fears, my anger, my issues; no warm and fuzzy, just ugly words about the reality of my battle, were the posts that seemed to resonate the most.

Ironically, visits to my site skyrocketed on the posts that I almost didn’t share. Those were the posts that I received texts, Facebook messages, phone calls, letters, and visits from you saying that you were encouraged, challenged, blessed even, by reading them.

God’s glory was most evident when I was at my weakest.

And that was all well and good.

And I was thankful God used that.

And then my treatment ended.

And I wanted to close the whole book and not write another chapter, because seriously, THAT WAS HARD.

At church, at Kroger, at some of my kid’s functions, I was constantly asked, “How are you feeling? Are you going to Race for the Cure? When are you going to update your blog? Will you talk to my friend/cousin/sister who was just recently diagnosed? When is reconstruction? Is your hair growing back curly?” 🙂

And I found myself running from that.

I didn’t want to be defined as the girl who had breast cancer.

I wanted to be who I was prior to August 2014 and forget about the last year. I had normal things to do, normal things to talk about, normal places to go; none of those involved breast cancer.

But reaching out and sharing my story when I was feeling better, proved to be harder than sharing when I was going through it.

I didn’t want it to be that way, but I mistakenly felt that not talking about it, not thinking about it, pretending that it never happened, would help me recover from the trauma of what I had just endured more quickly.

I was good for now (and I hope forever) and I didn’t feel strong enough to walk with others as they fought a battle I almost didn’t win. And just like I felt when I began this blog, I didn’t want anyone to think I wasn’t strong.

But you know what? Pretending that we were never broken, and that we are strong enough to handle everything on our own, even the aftermath of a terrible disease, makes us look like we are the hero. Where is God magnified in that?

Could it be that God wants my scars to become my story?

Is it possible that God can use what I endured to help those who are presently hurting?

Do I consider all I have learned through this journey as resources to hoard, or opportunity to steward?

I pondered these things, and prayed that God would heal my very wounded heart and (even now) my worried mind, and give me the strength to show my scars and share my story.

There are too many hurting women who are newly diagnosed, currently fighting their battle, or wrestling, as I was, with the aftermath. Masking the residuum of the battle was wasting my pain, the very thing I proclaimed I would not allow.

And as God so often does, he faithfully orchestrated a beautiful healing on Sunday, December 13th.

That weekend at our church, First Assembly of God in North Little Rock, is known as Family Christmas. Every year during Family Christmas needs are met and lives are changed as a result of the generosity of many who attend our church.

This year, very deserving families and individuals were the recipients of much needed items many of us take for granted, such as beds to sleep on and coats to keep warm. A school received toys and food items to give to students who were in dire need. A few people, faithful in their ministry to the church, despite unrelenting need, received a car and gas money. Many others received gifts, money to live on, home repairs, and necessities to get them back on their feet. One family even received a house!

And there was one lady who, despite her recent resistance to allow God to use her scars to share her story, received a Christmas miracle that morning.

Team Tina no longer represents Tina MacNamara. Team Tina is now a ministry at North Little Rock First Assembly that supports those who are battling breast cancer. We want them to know they are not alone. This ministry is comprised of women who are committed to praying, encouraging, and walking alongside those who are enduring treatment for this disease.

That morning God took the broken parts of my heart, and replaced that brokenness with a burning desire to walk alongside those who are going where I have already been. My scars have become my story and without Him, I really wouldn’t be where I am today. Please know, God is the hero of my story.

There are many who are hurting and you are uniquely qualified to reach them with love and support. They need someone who truly understands, and sometimes, unless you’ve walked that road yourself, you can’t really relate.

You may think of your scars as something you want to hide, sweep under the rug, move on from, forget about. God wants you to use your scars as credibility to love those who are in the process of receiving their own scars. It may be a physical illness, a divorce, a mental illness, a wayward child, a financial setback, depression, the death of a child/spouse/sibling/parent.

Could allowing God to use your scars to show His love to someone else be what He wants you to do in 2016?

I understand, it seems easier to try to forget, than to reach out and love others who are going through the same hurt. It’s an easy justification. But if you will allow God to use your experience to help others, even if you’re convinced you don’t have anything to offer, He will give you the strength to share your story. I’ve been there. I can tell you, when you reach out to others who struggle with something you are all too familiar with, He will heal your heart as well.

As you probably noticed from the video clip, I had NO idea. Actually, when Pastor Rod said my name, I was reflecting on the love from our church to those in need that I just witnessed in the service. Really. I was.

And when I say “reflecting” what I mean is, I wasn’t paying attention to what he said prior to saying my name, because when it comes to thinking, I’m not much of a multi-tasker. (Some people call that ADD, but whatever.) So all I heard was what I thought sounded like my name. So yeah, I was a little confused at first. 🙂

Family Christmas is so wonderful to watch. If you have some time over this holiday weekend, I encourage you to click on the links below and watch one (or all four) of the Family Christmas services. I can’t think of a better way to start off the New Year than being reminded of all God has blessed us with, even things we may have taken for granted. Do you have a bed to sleep in tonight? Then you are blessed.